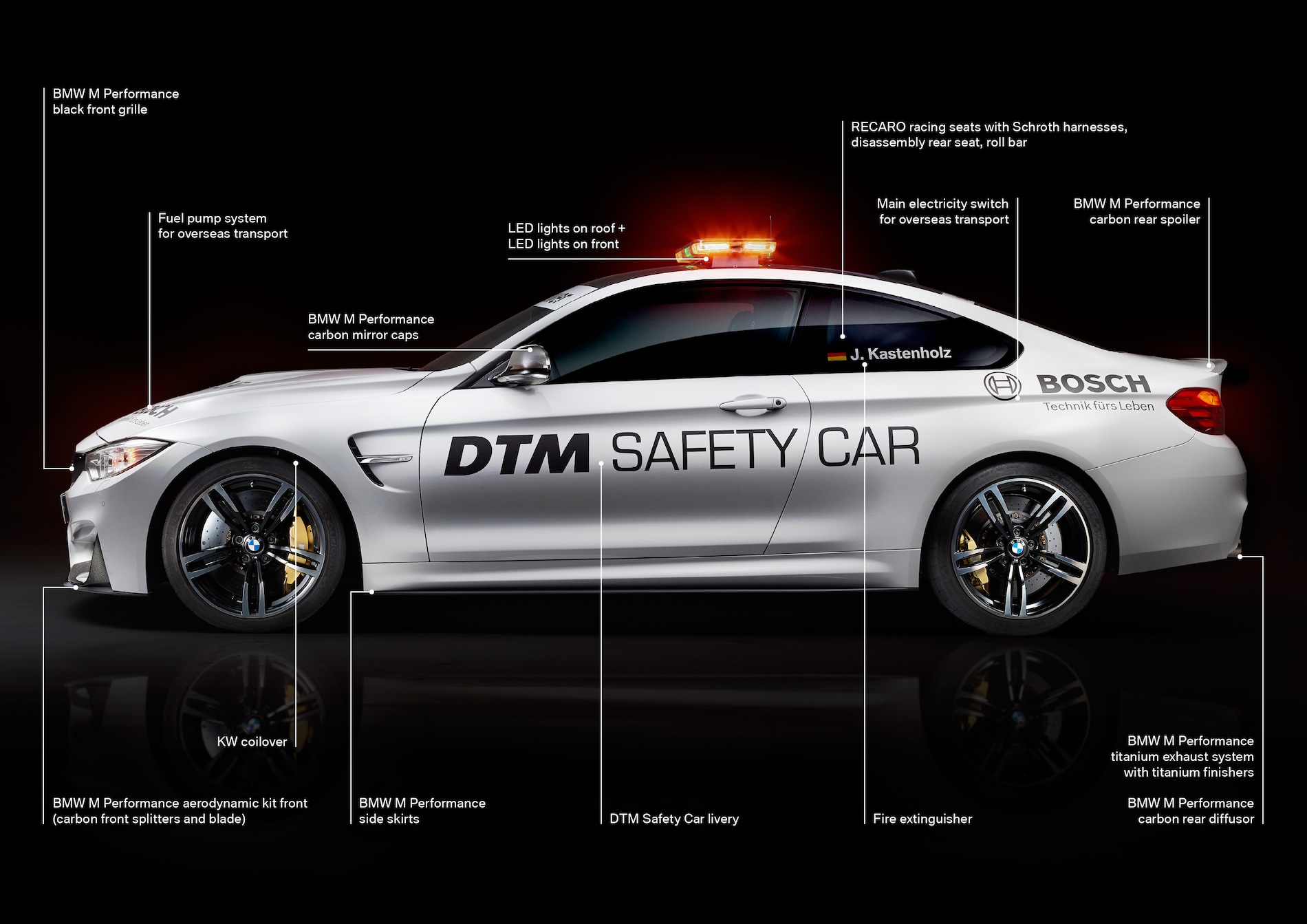 The BMW M4 Coupe has already started serving as the MotoGP safety car, and now it’s also been announced as the safety car for the 2014 DTM race series.

Munich (DE), 2nd May 2014. BMW Motorsport will not only field eight BMW M4 DTMs in the 2014 DTM season, but is also represented by a new lead car, based on the production model of the BMW M4: the BMW M4 Coupé DTM Safety Car will lead the 23 DTM racing cars around the circuits on the race calendar safely and with great aplomb.

The new BMW M4 Coupé (combined fuel consumption: 8.8-8.3 l/100 km; combined CO2 emissions: 204–194 g/km) will make its debut as a safety car at the race at the Nürburgring (DE) on 17th August 2014. The BMW M4 Coupé combines motorsport genes and road capability in a highly-emotional and balanced general concept. The completely new, 431-hp six-cylinder inline engine with M TwinPower Turbo technology and high-rev characteristics generates a maximum torque of 550 newton metres over a wide range of speeds. This allows the BMW M4 Coupé to accelerate from 0 to 100 km/h in just 4.1 seconds.

“Having decided to start the 2014 DTM season with a new challenger, in the form of the BMW M4 DTM, it was a logical step to have BMW M GmbH put together a BMW M4 Coupé DTM Safety Car,” said BMW Motorsport Director Jens Marquardt. “To lead the DTM field out in style, the safety car itself must also be extremely sporty. The BMW M4 Coupé certainly provided us with the basis to achieve this.”

To safely guide 23 DTM racing cars around a circuit, the safety car itself must demonstrate ultimate sportiness. A powerful drive train, high-performance chassis and perfect handling in any weather conditions are an absolute must. As it happens, the BMW M4 Coupé with its many BMW M Performance Parts is naturally at its strongest in precisely these areas – and is light-footed thanks to its intelligent lightweight design.

Back in the winter of 2013 a team of BMW M employees started work on converting the car from what was already a mightily impressive, roadgoing coupé to a safety car capable of taking a leading role in the DTM. The basic car was assembled at the BMW plant in Munich. From there, the BMW M4 Coupé went to the BMW M factory in Garching, where the assembly and modifications continued by hand. These included the technicians removing the rear seat of the car and installing a roll cage and Recaro racing seats with Schroth belts for its outings as a safety car. Furthermore, the car was also equipped with LED lights on the front apron, a radio communication system, LED lights on the roof and a special livery.

On top of all this came the extensive use of BMW M Performance Parts – from the exhaust silencer system (sample videos), front splitter, black front grille, mirror caps, rocker panel attachment and rear spoiler to the rear diffuser, the technicians prepared the BMW M4 Coupé for its demanding outings on the racetrack. The modifications took about two months to complete. The BMW M Performance Parts installed offer an insight into how good the components, which are available to all BMW customers, can look. 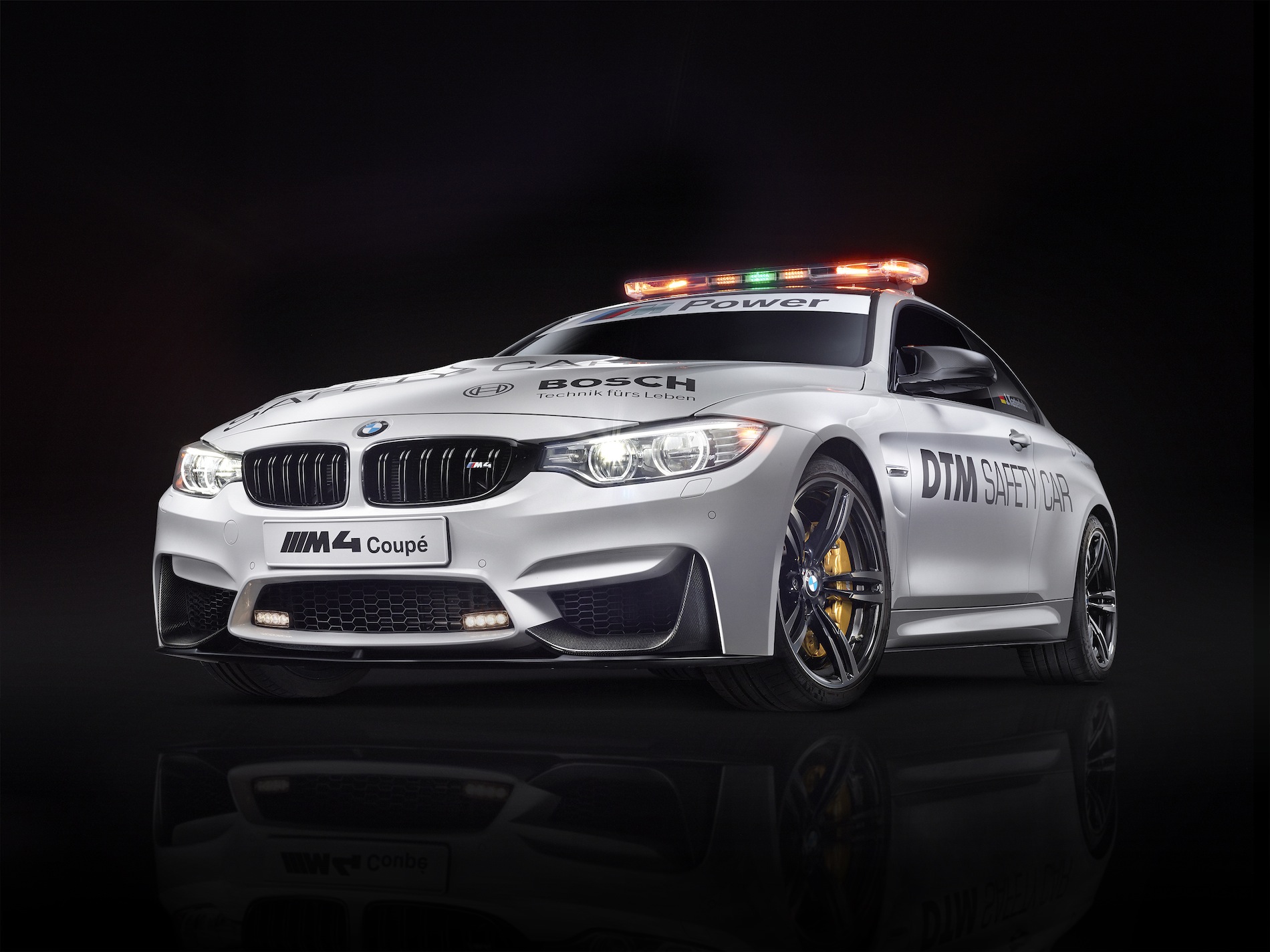 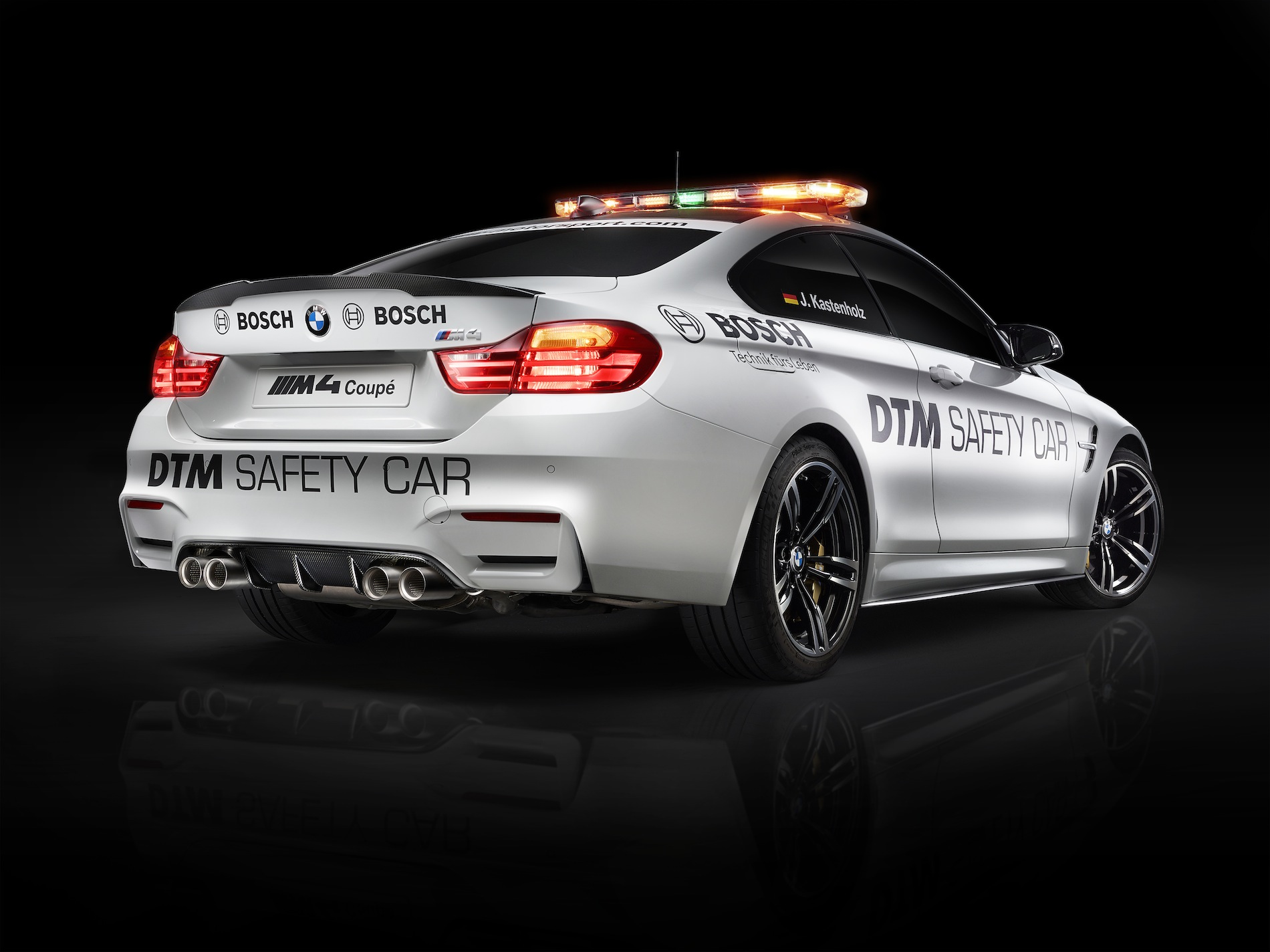 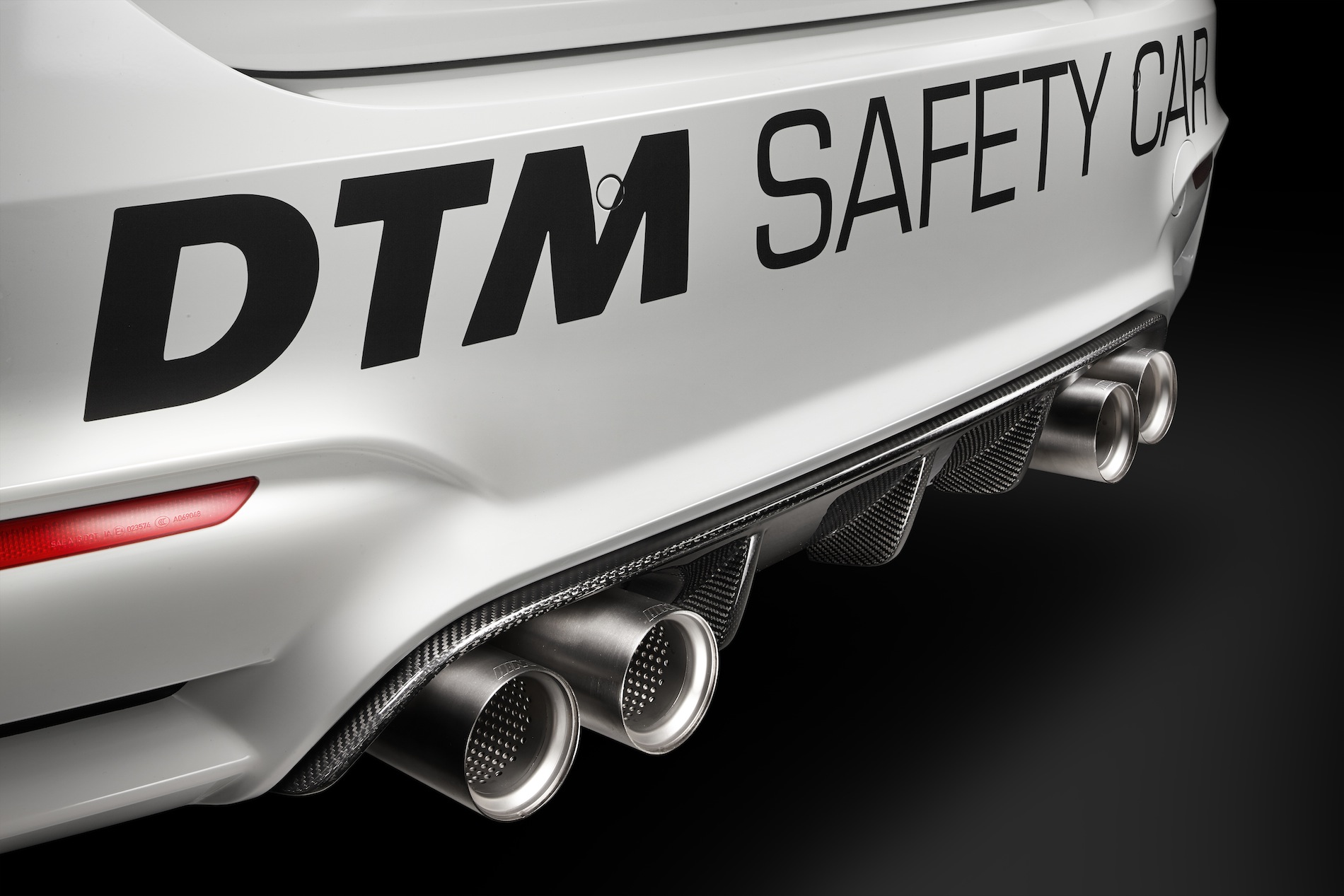 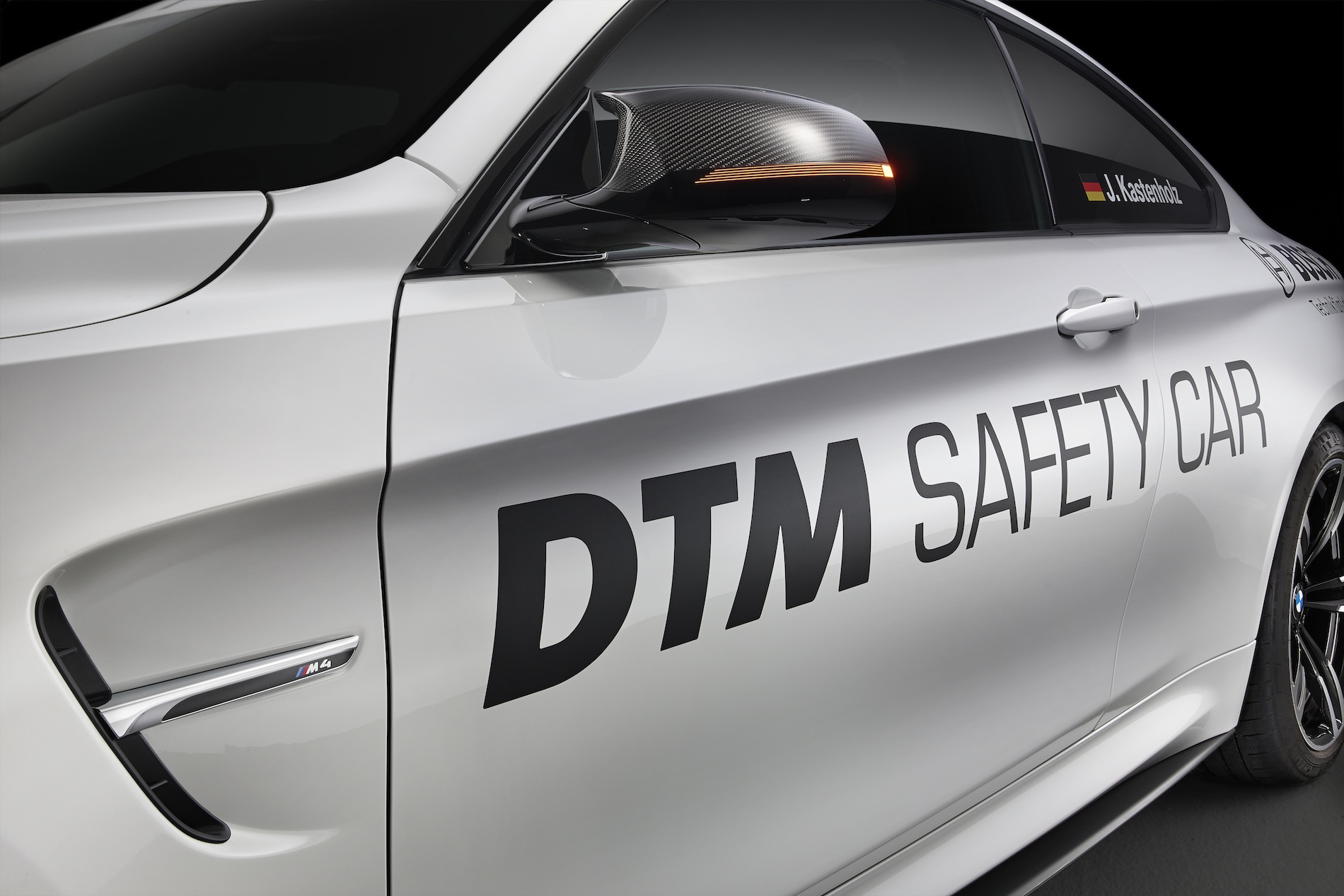 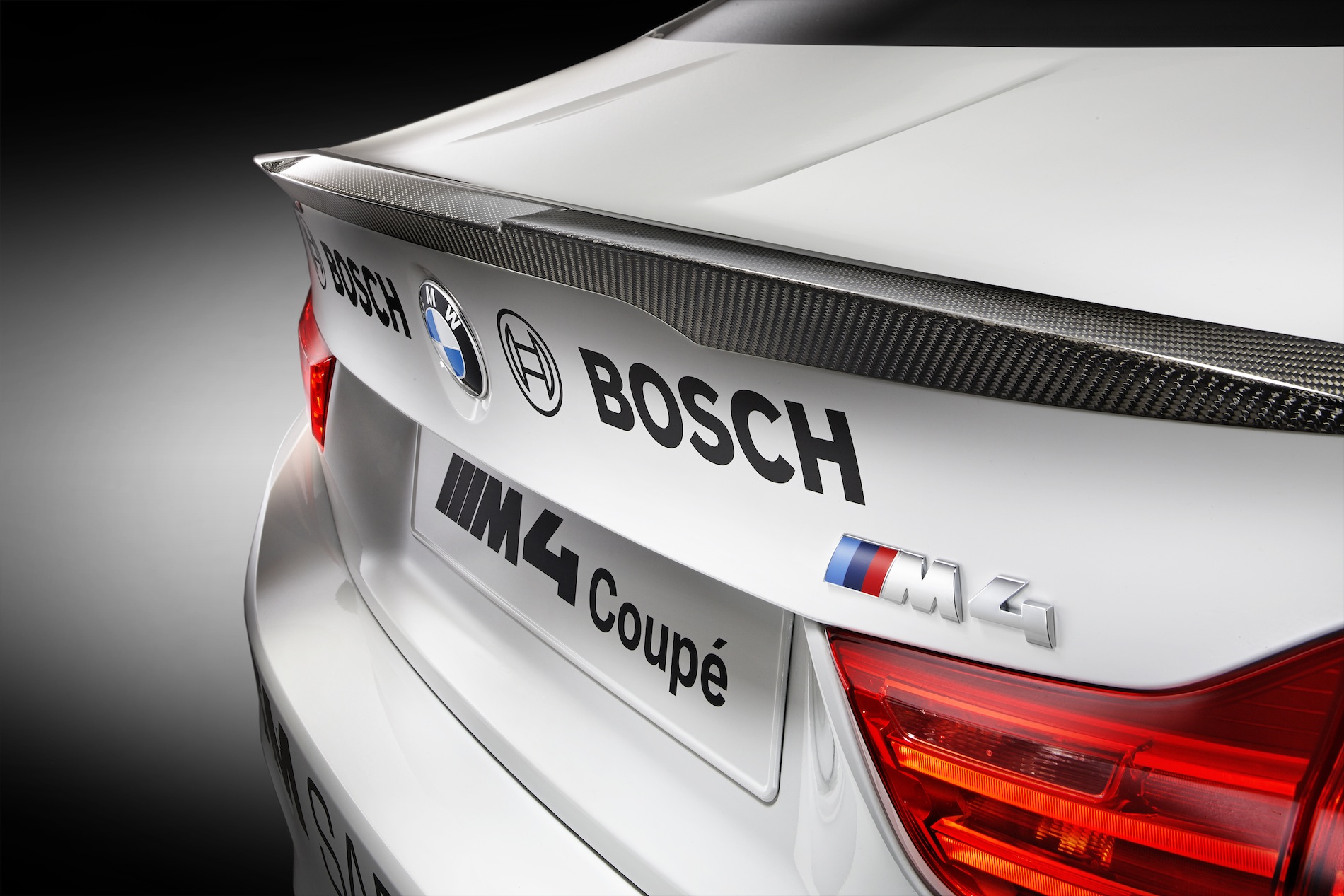 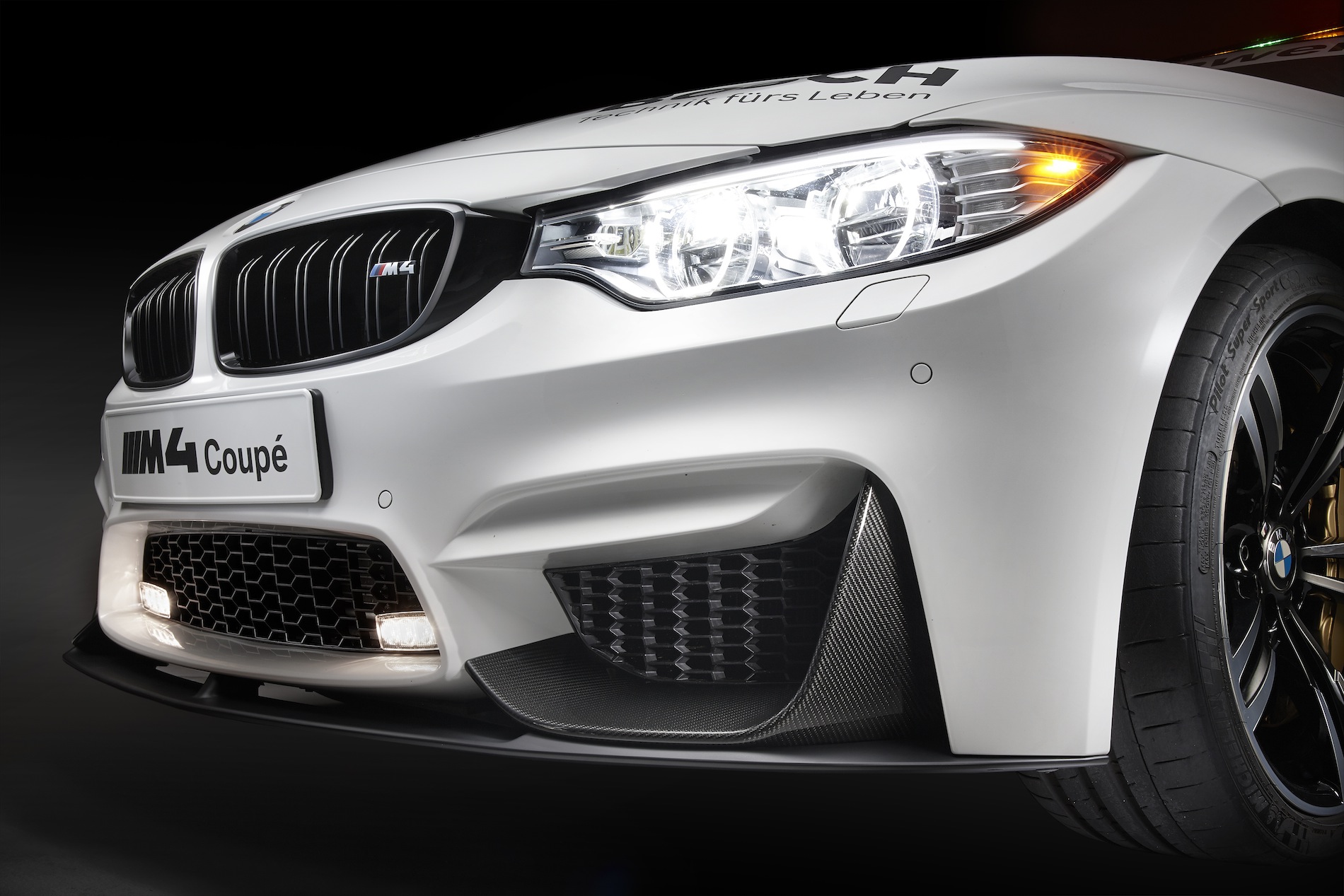 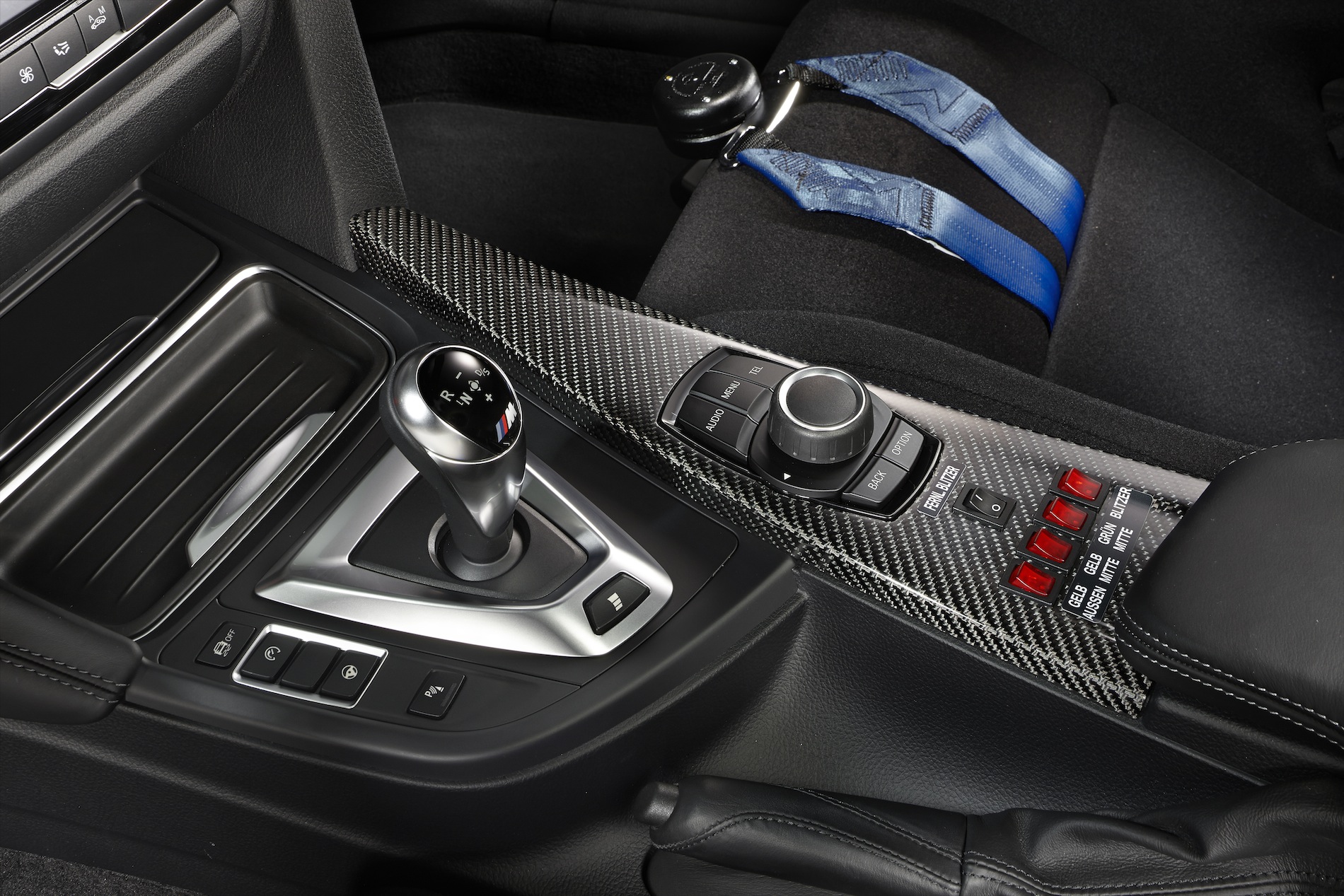 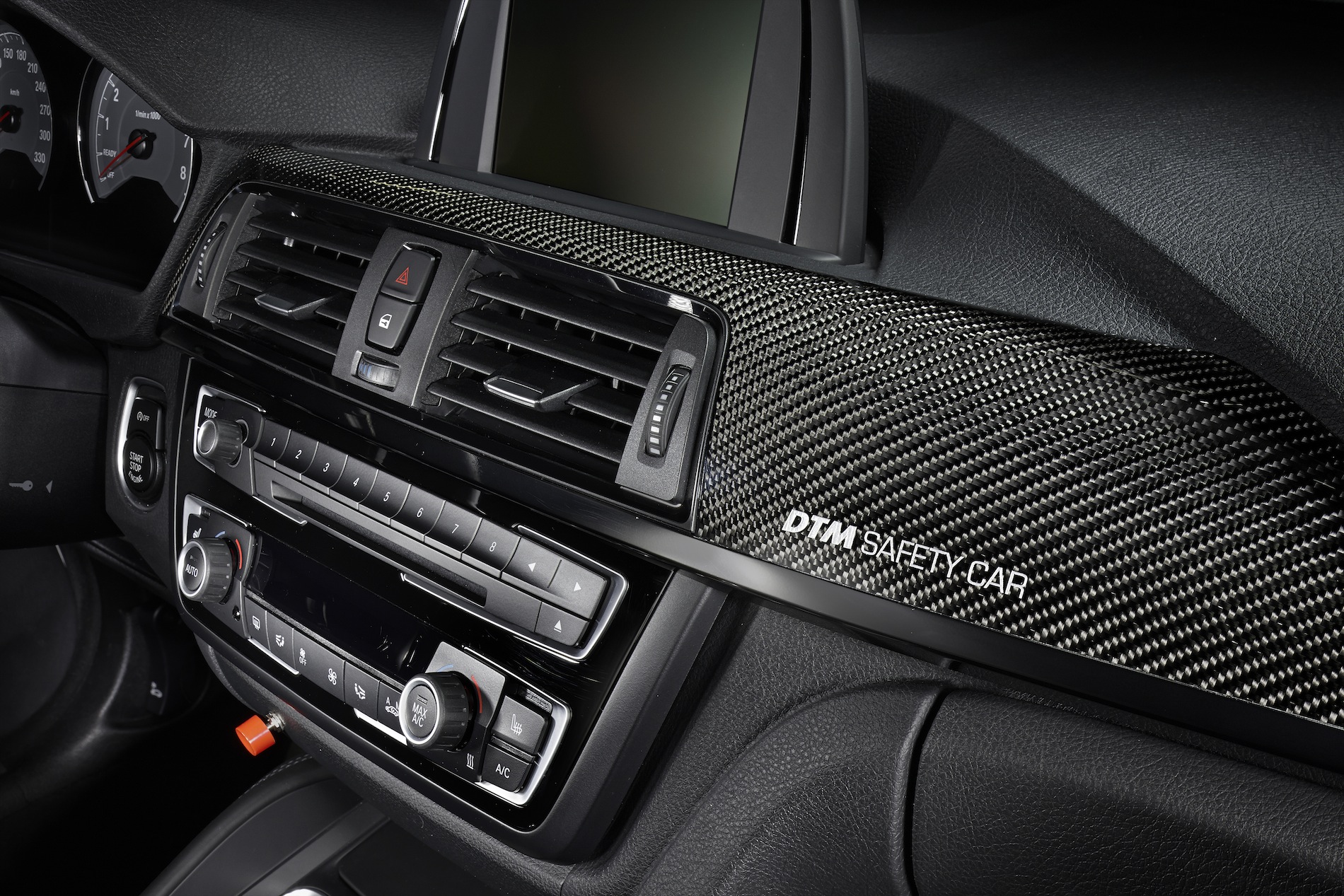 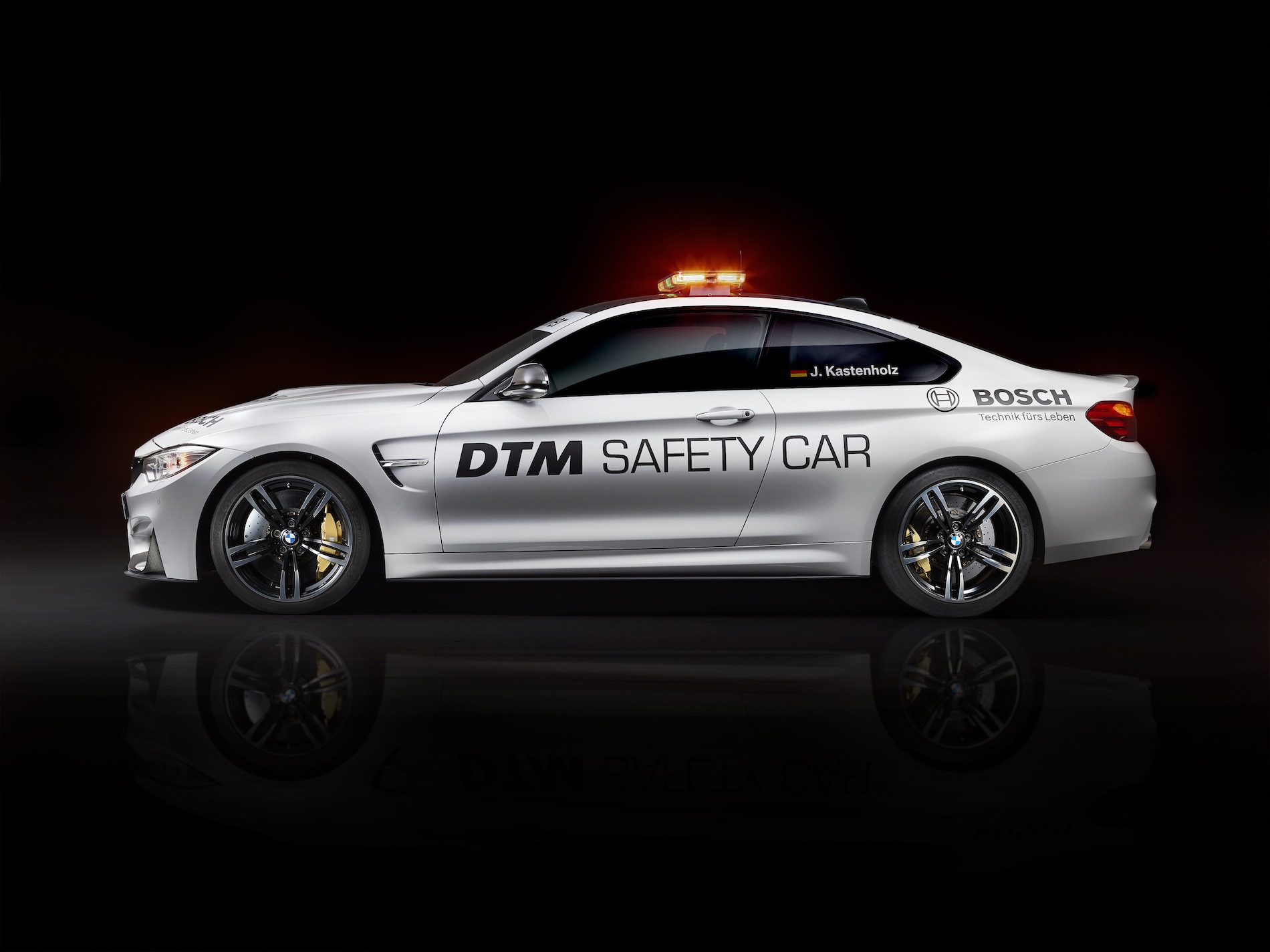 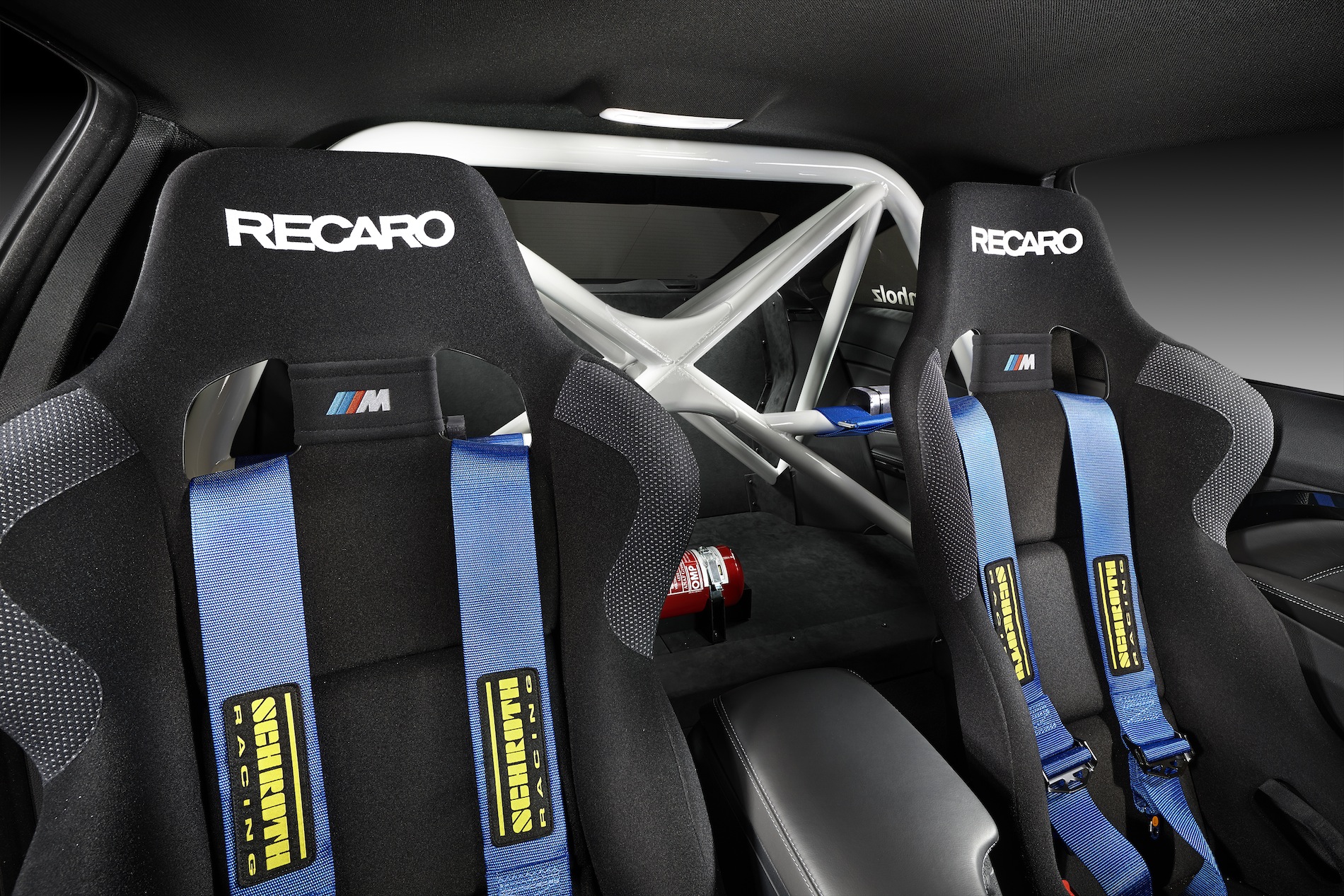